Back to all stories

In 2009 I went to a Coldplay concert in Auckland with Sam, Evie’s awesome Dad. It was great. They played Yellow at the end, and giant yellow balls were falling from the roof, along with hundreds of thousands of colourful paper butterflies.

The whole scene was magical. I cried. It wasn’t the magical scene so much as the lyrics of Yellow that got me. I was thinking about Evie, who was one year old at the time and had already gone through so much in her life.

Her rare diagnosis meant that we lived each day in the moment, fully present but also living in between worlds. One foot aware and prepared in the potential of loss, and one in the world of life and the here and now.

We learned to hold these two very opposite spaces together in balance.

….your skin, oh yeah, your skin and bones

turn into something beautiful

and you know, you know I love you so

You know I love you so……

Evie was so skinny and so bony, that I let myself think that this song was hers. Written just for her. This song was about us.

When she died a year or so later, on the day of her funeral, I didn’t know what to wear. That may sound trivial, but it was something that felt big at the time.

We had decided to play the acoustic version of Yellow at the funeral, so I remember thinking that if I wore something yellow, maybe that could be my symbol for her. To wrap her around me somehow.

So, my friend found me a little yellow cardigan to wear- and I felt a tiny sense of peace.

Almost 12 years later, I still wear something yellow. It can be small, like I have painted yellow toenails almost permanently. I wear the same yellow earrings almost every day because they are fabulous, and they were given to me by a dear friend.

And here is the most amazing thing that I discovered. Wearing something yellow every day, wasn’t and isn’t just for me.

After Evie died, people didn’t know what to say, and I didn’t know what I wanted them to say. But I felt it when they said something awkward, cliché, or accidentally hurtful, when all they were doing was try to connect with me, make me feel better, or say something meaningful.

They’d say things like, “at least she is in a better place”, “at least you got two years with her”, “it was her time”….. “do you think you’ll have more children? Maybe next time you’ll have one without disabilities”.

By wearing yellow every day, people started to connect Evie and yellow too. Friends would leave yellow flowers on my desk or doorstep, or they’d bring me jars of yellow jellybeans.

They’d tell me they saw a beautiful yellow dress in the window of a shop, and it made them think of me and of Evie. Or they simply sent me a photo of something yellow. People could tell me they loved me, they loved Evie, they were thinking of me, wishing the best for us…. with no words. No awkwardness, no hurt, no pressure, no fear of getting it wrong. Just pure love, in the powerful language of colour and symbol. Our words are not adequate to wrap around the incredible depths of grief and pain of loss.

So today, 4163 days after Evie’s funeral, I still wear something yellow. For joy, for connection, and to snuggle a little piece of Evie around my heart, body and spirit.

It still brings me peace, and it still speaks the language of human connection and compassion. 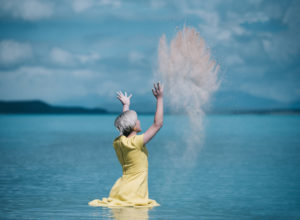